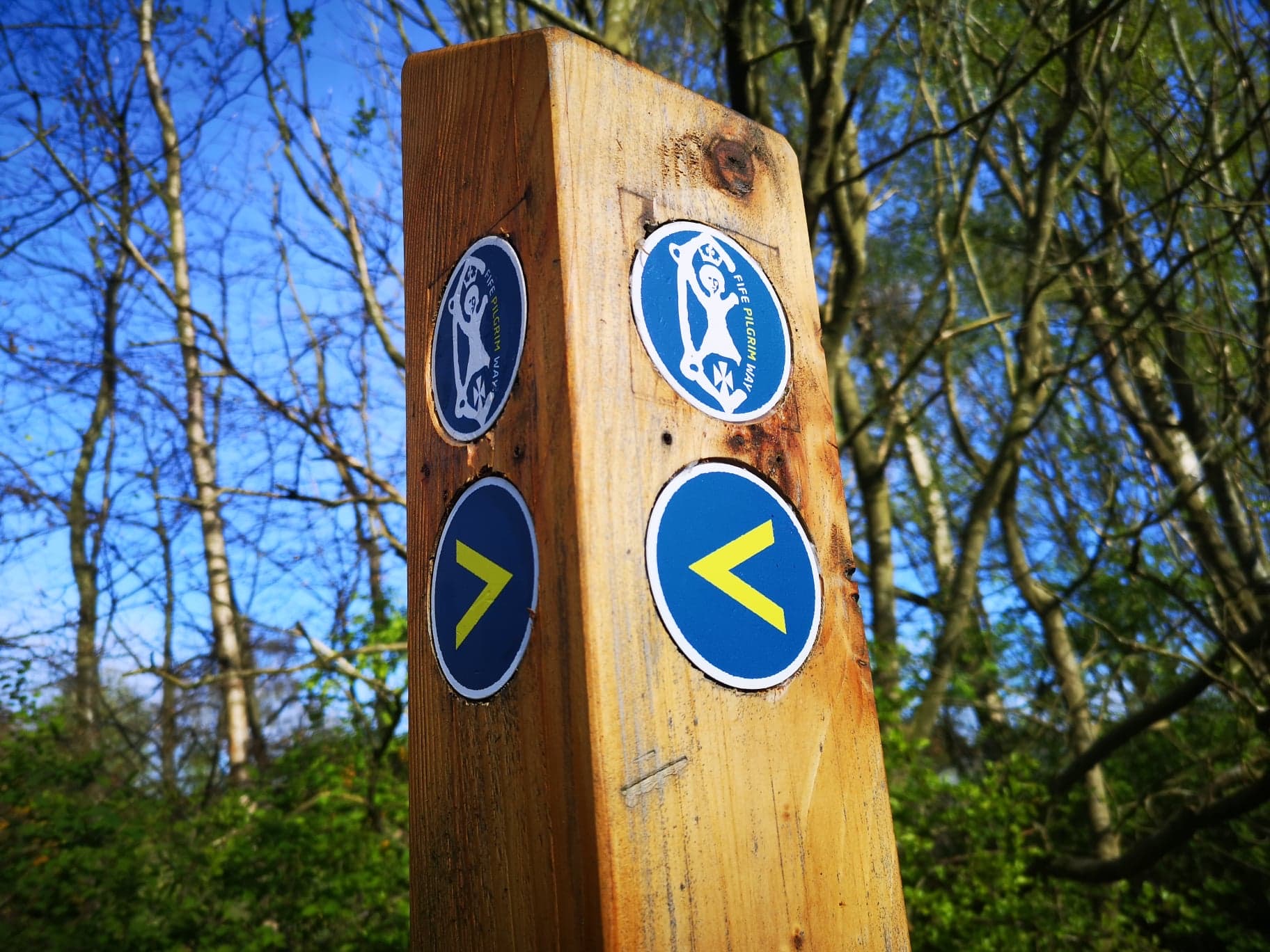 For 400 years, St Andrews was one of the main pilgrimage destinations in Medieval Europe. Rich and poor flocked to be near the bones of St Andrew, one of Jesus’ disciples. This was considered to be the next best thing to being in the Holy Land and walking in the footsteps of Jesus himself. St Andrews joined ranks in terms of importance with the popular disciple destinations of Rome (St Peter) and Santiago de Compostela (St James the Great).

St Andrews may have been the main attraction, but pilgrims were also drawn to Dunfermline to visit St Margaret’s miraculous shrine within the beautiful Dunfermline Abbey a burial place for Kings and which has seen worshiping since 1072. A host of other saints were represented by churches, chapels and healing wells along the road to St Andrews. These provided perfect places to pause, as well as important destinations in their own right for local pilgrims.

Pilgrimage made a permanent mark on the landscape of Fife. Many of its roads, bridges and crossing points, including the famous Queen’s Ferry, were created hundreds of years ago to ease the way for the steady stream of pilgrims. Inns, chapels and almshouses were also built to offer the travellers a place to rest, refresh and receive medical help. Providing these facilities was considered an act of piety that helped to smooth the path to Heaven. Pilgrimage changed the face of Fife forever and earned it the nickname of the ‘Pilgrim Kingdom’.

The Fife Pilgrim Way follows one of the routes taken by countless pilgrims to Scotland’s holy hot-spot.

For more information head to the Fife Pilgrims Way website.

The Fife Pilgrim Way was re-opened in July 2019, connecting West Fife with East Fife via routes used by medieval pilgrims. The overall route brings together a network of existing paths, tracks, core paths and rights of way into a single journey across the heart of Fife. During Lockdown the Guardian sent their reporter along the 52mile route, read his full reflection here.

The route described below is split into 7 convenient sections to do together or separately, each between 8 and 11 miles (12-18km). Each start and end point is linked by a single bus service making it easy to do a one way walk whilst leaving a car at one end.

The route is waymarked throughout it’s length though some of the waymarkers can be a bit subtle in built up areas this is being improved upon each month.

Much of the route is on hard surfaces (over a third is on road and pavement), hence trainers may be a better choice than boots for footwear. However, there are some unsurfaced path sections and a couple of field edges where the route could be a bit muddy after rain. It is to be hoped that in time, as the route matures, pavement/road walking will be replaced with off-road sections. The description below includes suggestions of alternative routes to miss out some of the road and town walking. For a review of the whole route and the highlights associates have a look at this helpful guide.

The historic town of Dunfermline has been a chief draw for pilgrims to Fife for centuries. Immerse yourself in its history and hospitality before following the route through the beautiful backdrops of Loch Fitty and Blairadam Forest.

For hundreds of years Dunfermline has provided countless pilgrims with an inspiring destination. Its magnificent abbey is the burial place of many of Scotland’s kings and queens, including King Robert the Bruce and Queen Margaret, who was later made a saint.

Many miracles are recorded as having taken place close to St Margaret’s shrine, and a number of Scottish queens wore her shirt for protection during childbirth. Medieval pilgrims who visited the abbey on her feast day of 16 November were promised a smoother journey to heaven. This made the arduous journey of pilgrimage worthwhile.

A number of other local sites associated with pilgrimage and Saint Margaret may still be visited today. These include the Head Well, Saint Margaret’s Stone and St Margaret’s Cave, where the Queen is said to have rested and prayed respectively.

If you or your church group would like us to open the church for worship please get in touch. The church is open throughout the week, more details of this and our regular services can be found on this website and we are hoping to extend our opening times to suit pilgrims arriving and leaving Dunfermline.

The church also has a large hall, sun-trap enclosed garden, two toilets and a big modern kitchen. If you or your group would like to use the hall for accomodation please get in touch.

Future plans: in 2019 the vestry committed to improvements to the building, this included wi-fi, upgraded sound, new signage and a new porch entrance. The initial work is all now complete (Summer 2021), and in the future we hope to be able to improve our facilities further to better accommodate the needs of pilgrims.